Stories have the power to change the world … they inspire us, teach us, connect us. This is the fifth installment in the “Stories That Change The World” series. 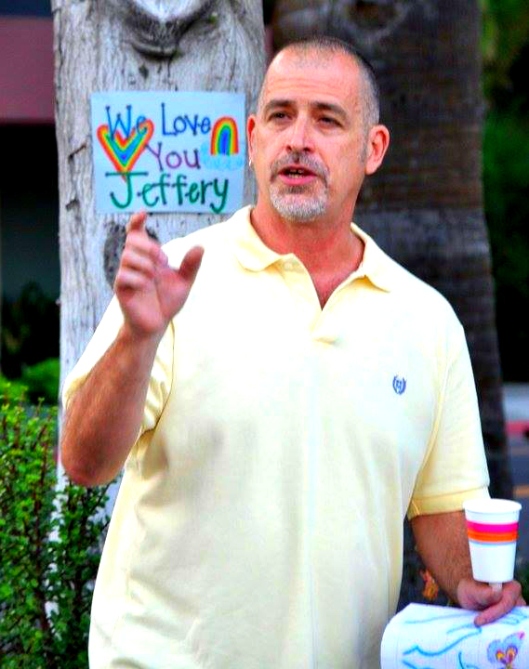 Michael Bussee shared this story on June 6, 2015 in a private Facebook support group he started several years ago for those who have survived the “ex-gay” experience…

13 years ago today, I survived a hate crime. My best friend (Jeffery) did not. The experience would change me (for good and bad) forever. Remembering him today and thinking of how far we still have to go…

We had gathered that night to celebrate a friend’s birthday, but it was a week night and we all needed to work in the morning. Leaving the bar through the back door, we stopped at my car to look at some photos of a camping trip we had taken to Joshua Tree. It was just before midnight and peaceful downtown — just a block from the Mission Inn where I now give tours

As we were thumbing through the pictures, and without any words or provocation, a group of five young men charged us. One sucker punched me in the face. Jeffery saw this and came to my defense. I begged him not to, but yelled for all of us to get into my van to get away from the attack. Jeffery (a military veteran) would not hear of it. He stood up to our attackers.

They responded by beating him, knocking him to the pavement and kicking him. Almost as soon as it started, they broke it off, ran to their truck and sped away. Jeffery got to his feet, shouting curses and brushing himself off. We decided to meet at their house to “de-brief” about what had just happened. We didn’t want to remain in the parking lot, for fear the gang would return.

On the way to Jeffery’s house, my cellphone rang. His husband (also named Jeff — we called him “big Jeff”) said, “Don’t meet us at our house. Meet us at the hospital.” I asked why. Big Jeff said, “Little Jeff has been stabbed and is bleeding badly.” I was shocked. My friend in the car with me said, “Mike, lift up your shirt”. I did. Chris said, “You’ve been stabbed too!”

You would think that you would know if someone stabbed you. My back felt sore, but I assumed that was from another punch. The knife I hadn’t seen had apparently punctured my right lung, just below my shoulder blade. We sped to the hospital. Jeffery was already in the ER when we arrived. He had been stabbed in the back 5 times. He bled to death on the operating table.

The entire community was in shock. The next night, hundreds of people (young and old, gay and straight) gathered for a candlelight vigil in his honor. Local pastors were there. The police chief spoke. And then we all marched silently to City Hall. We did that for several years afterwards, making our chalk tributes on the asphalt.

The gang members (who had shouted “faggot” while they beat and stabbed us) all went to prison. I developed a phobia of being in any parking lot, day or night. But I eventually got over that. I still have nightmares about June 6. I have had treatment for PTSD which helped a lot. The experience was a wake-up call for me. I thought violence against LGBT people only happened elsewhere.

Today, I will take some flowers to the little memorial they set up there at the corner behind the Menagerie. (Years later, I would meet my husband, Scott, in that same bar). Perhaps Scott and I will stop in and have a drink. I have only been back a handful of times due to flashbacks. But, life is good again. I have love, purpose and good friends, and each year I draw a message of hope in chalk…

(you can go here to view the details of the case) 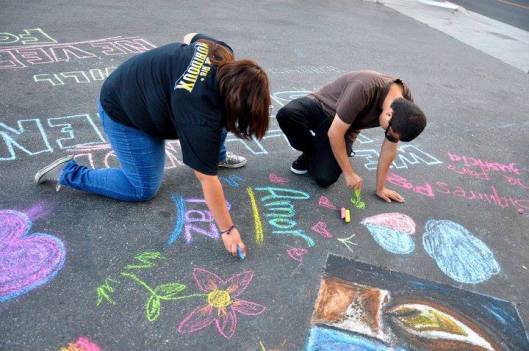 Michael Bussee was one of the originators of the ex-gay movement. In the 1970s, while working as a telephone counselor at Melodyland Christian Center in Anaheim, California, Bussee co-founded the Ex-gay Intervention Team (EXIT) and later hosted an unprecedented conference of ex-gay ministries at which a handful of ministry leaders, along with approximately 60 delegates, voted to form a loose coalition called EXODUS. However, within a few years, Bussee began to doubt the efficacy and ethics of the ex-gay message, left Exodus and eventually began to speak out about the tremendous damage that results from the anti-gay message and related practices such as Conversion Therapy. Today Bussee is a retired Marriage and Family therapist, who devotes much of his time helping LGBT people heal from the trauma they faced from Christian anti-gay messages and practices.