The August 2018 synchroblog topic invited bloggers to write about something that Christians do not necessarily always agree on. I decided to write about religious freedom laws and same sex marriage. 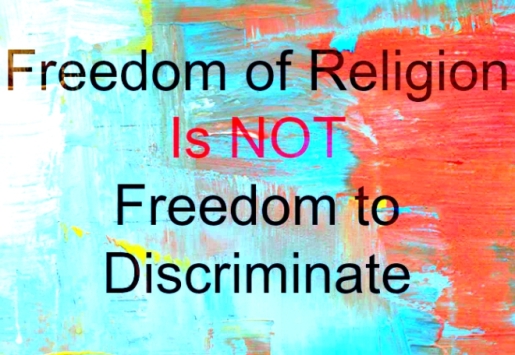 50+ years ago religious freedom arguments that are being made today to discriminate against LGBT people were being used to justify the discrimination of people of color and interracial relationships.

Most Christians have never taken the time to study what scripture says about same sex relationships for themselves. Most Christians read scripture with preconceived ideas that have been formed by believing what they have been told by someone else.

If anyone is willing to set their preconceived ideas aside and take the time to study original language while also taking historical context into consideration they will be able to comprehend that there is nothing in scripture that clearly condemns a loving, healthy same sex relationship. NOTHING!

In fact, there is more evidence in scripture to support slavery than there is to support the condemnation of all same sex relationships.

Scripture proves one thing about marriage … that marriage has been changing since the beginning of time. As society progresses, learns and improves, our institutions change.

Traditionally marriage was not between one man and one woman. The idea of marriage as a sexually exclusive, romantic union between one man and one woman is a relatively recent development. In the ancient world, marriage served primarily as a means of preserving power, with kings and other members of the ruling class marrying off their daughters to forge alliances, acquire land, and produce legitimate heirs. The purpose of marriage was primarily the production of heirs. Often times peasants wouldn’t even bother with marriage since they had no property or position to worry about.

The church didn’t even get involved in marriage until the 5th century. It wasn’t declared a sacred sacrament until the 12th century. And it wasn’t until the 16th century that weddings were performed publicly by a priest and with witnesses. A license to be married wasn’t commonplace until the 17th century which was around the time when romance began to have some involvement. As the middle class formed in the 19th century only then did young men begin to select their own spouses and start marrying without the consent of their parents. The idea of women having rights and not being a subordinate to their husband didn’t become common until the 20th century. It was 1965 before the Supreme Court ruled that a wife could be raped by her husband. Until then husbands who forced themselves on their wives were not guilty of rape, since they were legally entitled to sexual access.

The institution of marriage has always been in a constant state of evolution.

“Marriage, like transportation, has always been a part of human existence. But riding a donkey is very different from flying in a jet, and modern marriage has only superficial similarity to what went before. Just as we embrace each new mode of travel that enhances human welfare, no one should mind adapting marriage to the needs of modern people.” – Steve Chapman

Extending matrimony to same-sex couples advances the same interests cited in support of heterosexual marriage. Legalizing same sex marriages encourages stable commitments that offer a framework for procreation and upholds the interest of children in a legally protected family.

The evidence before us is that same sex marriage offers the same benefits to individuals and society that opposite sex marriage does.

And finally, there is nothing in scripture that would support the idea that Christians should not sell their services or products to someone who is, in their eyes, sinning. In fact, that would go against the very tenets of Christianity.

Any use of Christianity to justify discrimination is evidence of a misunderstanding about who Jesus was and what his good news was meant to convey to and about humanity.Discrimination and exclusion were not values of Jesus and are in conflict with the precepts of the Christian faith.

Oh – and one last point – the First Amendment does not guarantee us the right to discriminate based on our religion, it instead guarantees us the right not to be discriminated against based on our religious beliefs. Many Christians who have been led by their Christian faith to become affirming of same sex relationships are finding themselves to be “discriminated against” based on their religious beliefs and that is certainly unconstitutional.

Be sure and check out the other contributions for this month’s synchroblog:

What God May Really Be Like – Why Can’t Even God-Followers Get Along?

Wesley Rostoll – Why did God accept Abel’s offering and not Cain’s?

Liz Dyer – Religious Freedom is NOT Freedom to Discriminate

1 thought on “Freedom of Religion is NOT Freedom to Discriminate”