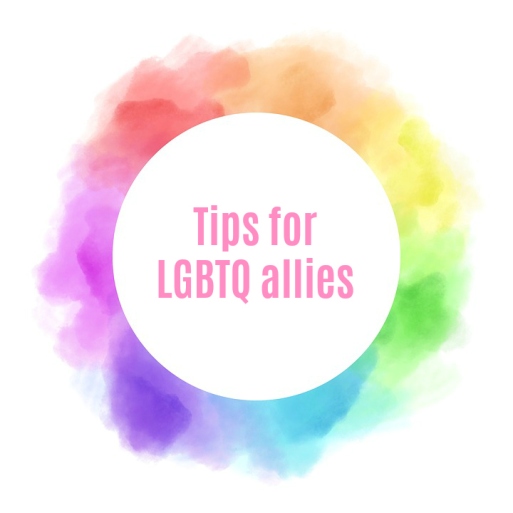 It’s Pride month – a great time for those of us who are not an LGBTQ person to think about what it means to be a good ally of LGBTQ people.

I’ve been on this journey for quite a while now. I’ve spent a lot of time listening to LGBTQ people about what they need and want from those of us who are straight and want to stand with them and for them. The tips I will share come from listening and learning from LGBTQ people. These are not exhaustive. I’m sure that someone could come up with more. However, these are what I consider to be some of the most important things to strive for if you want to be a good ally.

Before I share some tips I want to point out that there isn’t complete agreement about anything within the LGBTQ community. The LGBTQ community is large and diverse, and there are different opinions and ideas about everything. However, if you listen long enough and well enough, you will find that there is an opinion that most LGBTQ people have about many things, including what it means to be a good ally. My advice about situations where there is not a consensus, is to listen to everyone, don’t argue with anyone, but go along with what the majority of the LGBTQ community is embracing and saying.

Now for some tips …

(2) Be open-minded. If you are open minded you will be able to grow into a much better ally in a much shorter period of time. Don’t be afraid to let go of your preconceived ideas. Come to the conversation as if you have no ideas about LGBTQ people or what it means to be a good ally. Be ready to admit you don’t know or that you are wrong. Be honest about what you don’t know and be ready to learn. Those who are intentionally open minded end up making the best allies.

(3) Be inclusive and invite LGBTQ friends to hang out with you and your friends and family. Be intentional about it. Make connections and build relationships. Include LGBTQ people in your real life. Invite them to your home, include them in special occasions, include them when you go out to dinner with friends or to see a movie. The best allies are better known as “friends”

(5) Confront your own prejudices and bias, even if it is uncomfortable to do so, and don’t be defensive if someone points out that something you are saying or thinking does not seem supportive. It’s difficult for us to see through each other’s eyes but not impossible. This is where listening and being open minded will really come in handy. One of the hardest things for allies to do is to handle criticism. One of the reasons I think this is the case is because some of the most devoted allies are people who are tender-hearted and tender-hearted people can be easily hurt. However, tender-hearted people can also be very strong and resilient, and those are the qualities that good allies need to lean into. I always say being a good ally is not for the faint-hearted but definitely for the tender-hearted. My friend Rachel Held Evans said her mantra was “tough skin – tender heart” and I think that is a great mantra for those of us who want to be good allies to the LGBTQ community.

(7) Wholeheartedly embrace the idea that all people, regardless of gender identity and sexual orientation, should be treated with dignity and respect. Make it a point to share this belief with others as often as possible. One of the most harmful things that LGBTQ people have to face is the idea that they are less than others. Good allies will make it clear that LGBTQ people do not belong in the margins of society. Good allies will take a strong stand for the full inclusion of LGBTQ people in every way and every instance.

(8) Have a good understanding of sexual orientation, gender identity, and gender expression. Understand the difference, the language, and the appropriate way to speak and write about the subject. If you make a mistake apologize and learn from the mistake. There seems to always be a new term showing up. If you hear something that is new to you or you don’t understand do your research and learn what you need to know.

(9) Be aware of the coming-out process and realize that it is not a one-time event. If someone comes out to you listen, let them know you are honored that they shared with you and offer your support. Do not ‘out’ a person as LGBTQ to others. Respect people’s privacy and recognize that it should be their decision when and with whom to share their LGBTQ identity.

(10) Educate yourself and continue to educate yourself. There is always more to learn. Keep listening and learning. Keep reading. Keep asking questions. One thing I’ve noticed over the last twelve years is that things change. What was helpful 10 years ago may not be helpful today. The movement for equality, inclusion and protection evolves, language changes, the community grows. In order to be a good ally we have to keep educating ourselves. We can never know everything or too much.

(11) Find ways in your everyday life and in your own community to be a good ally and to advocate for LGBTQ people. Help your children or their friends file complaints about discrimination or harassment at your local school. Help organize events like celebrations for LGBTQ History Month at a local school or community center. Use your privilege to create safe spaces and shine a light on safe places that do exist. Volunteer at a local LGBTQ resource center. Show up at events that support LGBTQ people. Find something that you are good at and use it to support the LGBTQ community.

(12) Be visible. A good ally cannot be silent or invisible. One of the most important parts of being an ally is making yourself known as an ally. Making yourself visible may be as simple as wearing a rainbow bracelet or using inclusive language. It might mean showing up at Pride events or political events with a sign stating your pro-LGBTQ position. “Secretly” and “ally” don’t get to be used together. If you are not uncloseted in your support, you can’t be an ally.

Thanks for your support – your allyship matters and is making a difference.

Together we can make the world a kinder, safer, more loving place for all LGBTQ people to live.

4 thoughts on “Tips For LGBTQ Allies”