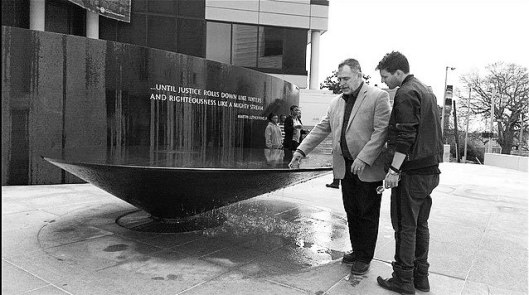 Michael Bussee and Christian Schizzel in Montgomery, Alabama at the Civil Rights Memorial

Stories have the power to change the world … they inspire us, teach us, connect us. This is the first installment in a new series here on Serendipitydodah called “Stories That Change The World”

Michael Bussee, one of the originators of the ex-gay movement, was asked to tell his story in 500 words or less in support of a legal ban on Conversion Therapy.

When I was a boy, homosexuality was considered a sin, a sickness, and a crime. During elementary and junior high, I was regularly bullied and beaten by boys who sensed somehow that I was different. They threw rocks at me, spit on me and hurled insults like “homo” and “sissy.” Before I reached my teens, I had decided that someday – somehow – I would find a way to cure myself. I went to the local library for help.

There were only five books on the topic, kept in a locked case because the topic was too “taboo” to have on the open shelves. The authors agreed: being gay was a “mental illness”, but with enough motivation and the right professional help, it was possible to reverse my “affliction.” I gave the books back to the librarian and left, despairing and determined. I told no one.

During my young adult years, I met with various therapists who tried to awaken my heterosexual attractions – by trying to uncover repressed trauma and visualizing “normal” sex with girls. This only added to my confusion and discouragement. Nothing changed.

I tried prayer and Bible study, and sought help from religious counselors. I was fully devoted to making it work. But it didn’t. I even started a weekly support group at my church. This led to the creation of Exodus International – a network of faith-based conversion programs. People from every state in America and from other countries contacted us for help in changing their sexual orientation. But no one changed.

Instead, our members grew even more troubled and depressed. Some dropped out. Some used drugs or alcohol to drown their despair. Some attempted suicide. One man in our “ex-gay” program repeatedly slashed his genitals with a razor and poured Drano on the wounds to atone for the guilt he felt. I experienced deep depression and anxiety, as well – feelings I still experience years later.

I left the program in the 1970s. Almost 40 years after I started Exodus International, I can honestly say that I have never met a gay person who became heterosexual through conversion therapy or ex-gay programs. Yes, some stayed celibate for a time. Some even married and said they were happy. But most of those marriages ended in painful divorces. Families suffer. Kids suffer.

I hope that one day these false cures will be exposed for what they really are and that conversion therapy will be put to rest for good. Being gay is nothing more than a natural variation in human sexuality. And conversion therapy is nothing less than abuse. The public, particularly young people, deserve to be protected from this false “therapy.”

That is why I support a ban on the practice.

Michael Bussee was one of the originators of the ex-gay movement. In the 1970s, while working as a telephone counselor at Melodyland Christian Center in Anaheim, California, Bussee co-founded the Ex-gay Intervention Team (EXIT) and later hosted an unprecedented conference of ex-gay ministries at which a handful of ministry leaders, along with approximately 60 delegates, voted to form a loose coalition called EXODUS. However, within a few years, Bussee began to doubt the efficacy and ethics of the ex-gay message, left Exodus and eventually began to speak out about the tremendous damage that results from the anti-gay message and related practices such as Conversion Therapy. Today Bussee is a retired Marriage and Family therapist, who devotes much of his time helping LGBT people heal from the trauma they faced from Christian anti-gay messages and practices.